William Blake’s “The Lamb” and “The Tyger”

In my first blog post on Blake’s poem sequence, The Songs of Innocence and The Songs of Experience, I discussed the structure of the work that Blake had in mind. Each half of the poem sequence presents two contrary states of humanity – that of innocence associated with childhood and of adulthood’s corruption. So each poem has a companion: for example, there are two “The Chimney Sweep” poems, two “Holy Thursday” poems. As Robert F. Gleckner points out in the excerpt from his article assigned for this unit: “For the serious reader of Blake’s songs…a constant awareness of the context or state in which a poem appears is indispensable” (1230). In other words,  Blake’s poems must be read with the overall structure of Songs in mind to fully grasp what Blake is trying to communicate. By reading each poem by itself we may not understand the poem’s meaning.

For each state, Blake, as the poet, takes on two different voices, one of comfort and joy (that of the Piper) and one of foreboding (that of the Bard). As I pointed out, Blake depicts this change in voice even in the very diction, or word choice, that he uses.

For this blog post, I want to turn to one of the most well-known companion poems from Songs, “The Lamb” and “The Tyger.” Here Blake not only continues developing the themes of childhood and nature vs. industry, but explores the very essence of the Creator. 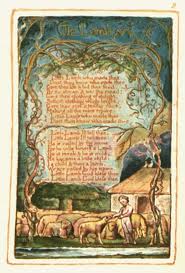 It is probably helpful to think of “The Lamb” as a Sunday school lesson. As with other poems in Songs of Innocence, the voice of the poem is that child speaking about very profound theological issues. Here the poem begins with the child asking the lamb “who made thee.” For the first half of the poem, the child expands this initial question, seeing God as a caring, benevolent figure who clothed the lamb in “softest clothing woolly bright” and led it to feed “by the stream and o’er the mead”(Lines 4 through 6). Like the natural world of the Piper, the poem depicts the pastoral scene that the lamb inhabits. 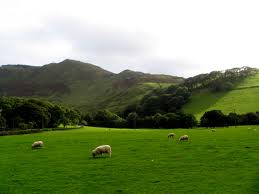 Blake reinforces here the association between innocence of childhood and the purity of the natural world.

In the second half , the speaker answers the question, which is obviously God in the context of the poem. What’s important to take away from this half of the poem is how the symbol of the “lamb” takes on multiple meanings: there is the lamb itself, but also the “Little Lamb” is Blake’s child reader. Finally, the lamb is also God (“He is called by thy name/ For he calls himself a Lamb”[lines 13 through 14].)

I have always found Blake in this poem to capture so well the voice of a child. If you have ever heard a child talk to an animal at zoo or farm, you’ll notice that they speak to the animals as if they were being understood. Even in lines 11 and 12, we can almost hear the uncontainable excitement in the child’s voice as he is about to reveal the answer. Moreover, Blake gives the reader a child’s perception of God, whom the speaker comprehends as both a child and a lamb. 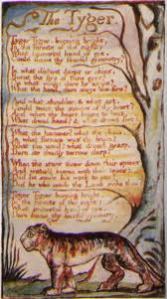 “The Tyger” maps onto “The Lamb” in that both poems begin with the question of who created each. Yet unlike “The Lamb,” the answer is withheld from us in “The Tyger” for reasons that will become clear towards the end of the post.

In this poem, Blake presents the darker side of creation – while the lamb lives in the valley feeding by streams and brooks, the tyger roams the forest at night. Where we read of the lamb’s soft wool and tender voice, we now encounter the tyger’s “fearful symmetry”, “the fire of thy eye,” and the twisted “sinews of of thy heart.” While the child’s voice in “The Lamb” finds nature to be only gentle and loving, the voice of experience discovers terror and death.

Now the question that “The Tyger” revolves around is whether God is the one who created this fearful beast. However, the poem is very much concerned with the implications of the question. How can the God of the lamb also be the God of the tyger? How can both animals, and the different aspects of creation they come to symbolize, exist together? Is God responsible for both innocence and corruption? If so, what does this then imply about God’s personality? (Think about lines 17 through 19 :”When the stars threw down their spears/ And water’d heaven with their tears,/ Did he smile his work to see?” To paraphrase Blake here: “When the rest of creation cried out when it saw the fearful beast he had made, did God smirk?” Blake imagines God as a sadist, one who creates the lamb simply as prey for the tyger!)

Now there’s an alternative way of reading the nature of the tyger. This may seem a bit out of left field, but think about the shark in Jaws. 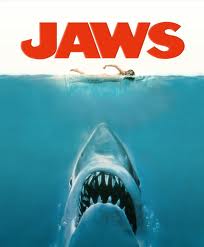 Throughout the movie, the shark itself does not actually appear evil; rather it comes to represent Nature as indifferent, cold, mechanistic. (The shark is constantly referred to as an eating machine at times.)

Here’s what the prop shark looked like underwater. Interesting it kept malfunctioning for most of production, hence why we don’t see the shark until half way through the film.

So it would be inappropriate to understand the shark as sinister, suggesting intent.

Similarly, this conception of the tyger as machine comes through in how the poem describes its creation. Take a look at the fourth stanza: “What hammer? what chain?/ In what furnace was thy brain?/ What anvil? what dread grasp/ dare its deadly terror clasp?” The metaphor that Blake uses for God’s creation is one of metal working. The tools God employs in forging the tyger are “the hammer,” “the chain,” “the anvil,” and “the furnace.” 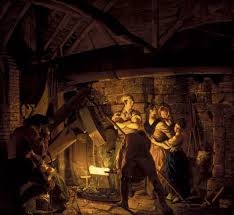 The tyger becomes less associated with the natural world and more with the industrial world. (Look at the illustration for this poem. The tyger’s eye appears almost machine-like.) Blake offers then a more disturbing implication of the tyger: if the tyger, and by extension creation, is a machine, then are the terms evil and innocence simply projected on to it by humanity? Does humanity exist in a universe indifferent and amoral?  Is God beyond our labels of evil and innocent?

Hi, thanks for taking time to stop by my blog, Renaissnace Matters. So here's a little bit about me . . . I am student, scholar, reader, writer, teacher, and general enthusiast about the European Renaissance, a.k.a the Early Modern period. In May 2010, I graduated with my doctorate in English Literature from Lehigh University, focusing my dissertation on the literary reaction to the Scientific Revolution. I currently have an article in the recent issue of Early English Studies (EES). Also, keep an eye out for my forthcoming book through Palgrave MacMillan, Francis Bacon and the 17th-Century Intellectual Discourse.
View all posts by Anthony Funari →
This entry was posted in Uncategorized and tagged childhood, God, Industrial Age, London, Songs of Innocence and Songs of Experience, The Lamb, The Tyger, William Blake. Bookmark the permalink.