I want to continue discussing Gilman’s “TYW.” This is such a rich and complex piece of literature that it is impossible to cover every aspect of the story I would like to. (We could spend weeks just on this one short story.) So for my second blog post on “TYW,” I will just to touch on three topics: 1) how can “TYW” be considered an example of Gothic literature, 2) in what way does Gilman’s narrator escape her confinement, and 3) how should we understand the rather confusing ending to the story.

“TYW” and the Gothic Genre

The term “Gothic” nowadays conjures images of angst-y teens listening to “The Cure,” reading Poe, and wearing all black. 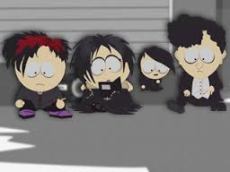 Originally, “Gothic” referred to the Visigoth germanic tribe, and eventually it came to mean anything medieval, especially architecture. 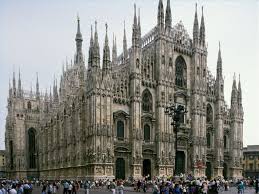 Gothic architecture was popular from the 12th through the 16th century . It is mainly defined by high arches and ceilings, high spires, and flying buttresses.

2) Most Gothic literature deals with the themes of madness, death, violence against women, confinement or imprisonment, and terror. Some well-known examples of madness in a Gothic tale would Edgar Allan Poe’s “The Tell Tale Heart” and “The Raven.”

3) A plot line for some Gothic tales usually focused on the psychological suffering of a heroine imprisoned by lustful villain.

4) The mood that Gothic literature creates is gloomy and terrifying, with elements of the supernatural.

Now you can probably see how “TYW” fits into the Gothic genre. The narrator wants to imagine the “ancestral” mansion she and John have rented for the summer as a “haunted house.” 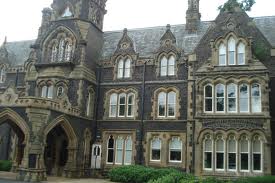 “A colonial mansion, a hereditary estate, I would say a haunted house, and reach the heights of romantic felicity – but that would be asking too much of fate” (654) 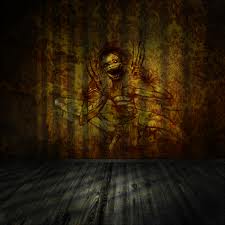 “I can see a strange, provoking, formless sort of figure, that seems to skulk about behind that silly and conspicuous front design” (659) 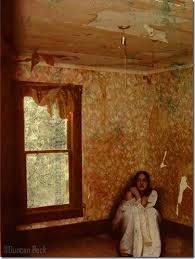 “I lie down ever so much now. John says it is good for me, and to sleep all I can.
Indeed he started the habit by making me lie down for an hour after each meal…
The fact is that I am getting a little afraid of John” (662).

If that was all there was to “TYW,” we could probably dismiss it as a generic Gothic tale. However, the brilliance of Gilman’s short story lies in how she twists the conventions of the Gothic genre. For example, the narrator is not imprisoned by a lustful villain but by her own husband/doctor, who while ignoring his wife’s objections confines her for therapeutic reasons.

(I love the moment when the narrator claims that she can see through her husband, that he is only “pretend[ing] to be very loving and kind” [664]. Maybe through her madness, the narrator can see the truth that John is not such a caring spouse/doctor!) Also, in Gothic tales the woman who is imprisoned is typically silent; that is, the reader does not have the opportunity to gain insight into what she is thinking. In contrast, Gilman’s narrator is the only person whose voice we actually get in the short story. So a typically silent female character gets to speak! Finally, and most importantly, the imprisoned heroine escapes on her own in “TYW,” albeit through her madness. I think that Gilman takes typical Gothic conventions, which do not allow for much female power, and transforms them in such a way that gives power to her female protagonist.

As I mentioned in the last post, part of the Mitchel’s rest cure was prohibiting his female patients from any intellectual exercise. In “TYW”, the narrator mentions how she is “absolutely forbidden to ‘work’ until I am well again” and that she has to hide the journal she is keeping of her experience from both John and his sister Jennie. . The narrator is made to feel by John that some how writing is causing her nervous condition: “[John] says that with my imaginative power and habit of story-making, a nervous weakness like mine is sure to lead to all manner of excited fancies” (658). The narrator then is not only confined physically, i.e. being barred into her room, but also intellectually.

The story we read – the narrator’s writing her thoughts – is then a form of escape for her and a way of undermining her husband’s/doctor’s authority. The narrator is able to secretively break the confines that John/her doctor has imposed on her by journaling her experience.

Moreover, the fact that the narrator has to write secretively by day is significant. I want to draw your attention to when the narrator writes about the woman in the wall paper “creeping”:

I don’t blame her a bit. It must be very humiliating to be caught creeping by daylight!

I always lock the door when I creep by daylight. I can’t do it at night, for I know John would suspect something at once. (664)

“Why should that man have fainted?”

The ending of Gilman’s “TYW” is enigmatic. First off, what does John witness when he walks into the room he has confined his wife to? Why would this cause him to faint? Does John die at the end? What does the narrator mean when she writes, “But he did, and right across my path by the wall, so that I had to creep over him every time” (666)? These are questions that scholars and readers of “TYW’ have been struggling with for decades and do not have clear answers to them. Two scholars, Sandra M. Gilbert and Susan Gubar, authors of The Madwoman in the Attic, interpret the ending as the narrator’s triumph over her husband.* Seeing his wife’s escape through madness from his physical and intellectual confinement of her, John is overcome and swoons, a rather un-masculine thing to do. The final scene – the narrator crawling over John’s body – suggests a reversal of power between husband-doctor and wife-patient. 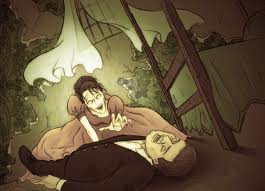 This discussion of how to understand the ending of the story brings us back to a question I posed in the previous blog post, one that I want leave you to think about: why is it only through her madness that Gilman’s narrator can see her imprisonment and so escape, in a fashion, from it?

Hi, thanks for taking time to stop by my blog, Renaissnace Matters. So here's a little bit about me . . . I am student, scholar, reader, writer, teacher, and general enthusiast about the European Renaissance, a.k.a the Early Modern period. In May 2010, I graduated with my doctorate in English Literature from Lehigh University, focusing my dissertation on the literary reaction to the Scientific Revolution. I currently have an article in the recent issue of Early English Studies (EES). Also, keep an eye out for my forthcoming book through Palgrave MacMillan, Francis Bacon and the 17th-Century Intellectual Discourse.
View all posts by Anthony Funari →
This entry was posted in Uncategorized and tagged Charlotte Perkins Gilman, female confinement, Feminism, Gender, Gothic literature, madness, The Rest Cure, Women Writers. Bookmark the permalink.